The Nike logo, known as the ‘Swoosh,’ is formed by two simple curved lines. It’s just about the simplest logo imaginable, and yet it carries with it billions of dollars worth of accumulated branding and marketing associations. So what does it mean?

At its most fundamental level, the Swoosh represents motion and speed. The shape depicts an arc of movement. The word ‘swoosh’ is onomatopoeia for the sound you’d hear as Lebron James or Michael Jordan zips past you en route to a spectacular dunk. In Greek mythology, Nike is the Winged Goddess of Victory. The mythological associations for the brand Nike are flight, victory, and speed. The goddess Nike had the power to fly – and so did Michael Jordan. His signature shoes included the Jordan Flight and the Air Jordans. His most famous Nike poster was known as the ‘Wings’ poster. 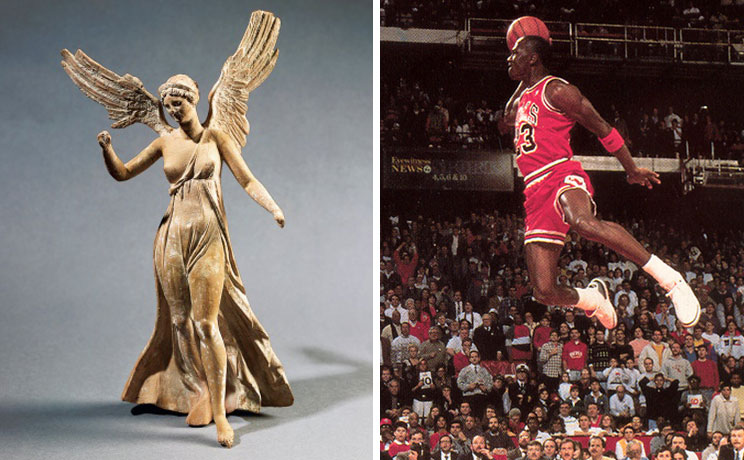 Origin of the Swoosh

The Swoosh was designed by a college student (!) named Carolyn Davidson for a mere $35 (!!!) in 1971. Davidson not only designed the Swoosh but also suggested the name Nike as an alternative to founder Phil Knight’s other idea for a brand name: ‘Dimension 6.’ She was subsequently employed by Nike and later compensated further with a gold Swoosh ring and Nike stock (see video). Whatever they gave her, I doubt it was enough given the immensity of her contribution.

To say that the Nike Swoosh represents motion and speed is only to inspect the surface of the design. The logo now carries with it the connotations of long-term, multi-billion dollar branding efforts. It represents transcendence through sports. It carries with it decades worth of affiliated basketball herosim, urban hip-hop attitude, and more.

Naomi Klein’s book No Logo is essential reading for anyone interested in branding. In it, Klein describes Nike’s philosophy of brand over product: long ago, Nike shifted its focus almost entirely to branding and marketing, while outsourcing production to cheap foreign contractors. This way, they could sell something much bigger than a pair of shoes: a lifestyle. According to Nike founder Phil Knight, “There is no value in making things anymore. The value is added by careful research, by innovation and by marketing.”

I used to teach an art class for teens and I often liked to pick their brains about the logos they saw on their favorite products, their urban surroundings – and on their feet. The Nike logo was inevitably present in the room on someone’s kicks. I’d ask the group, “So what does the Nike logo mean?” The most common answer was, “it’s a checkmark.” Well, a checkmark has a hard angle between two straight lines (like the Verizon logo). The Swoosh is curved. Because it’s not a check mark.

If graphic design has an equivalent of Michael Jordan, it’s my hero Paul Rand (designer of some of history’s most recognizable logos, including those of IBM and UPS). Rand once said, “Design is so simple, that’s why it is so complicated.” The Nike Swoosh derives its complexity from its simplicity. It’s the most basic form you can imagine – only two lines. It is precisely this simplicity which allows it to thrive in so many different contexts, to carry the brand on its own (with or without the accompanying word ‘NIKE’), and to absorb and reflect so much brand messaging.