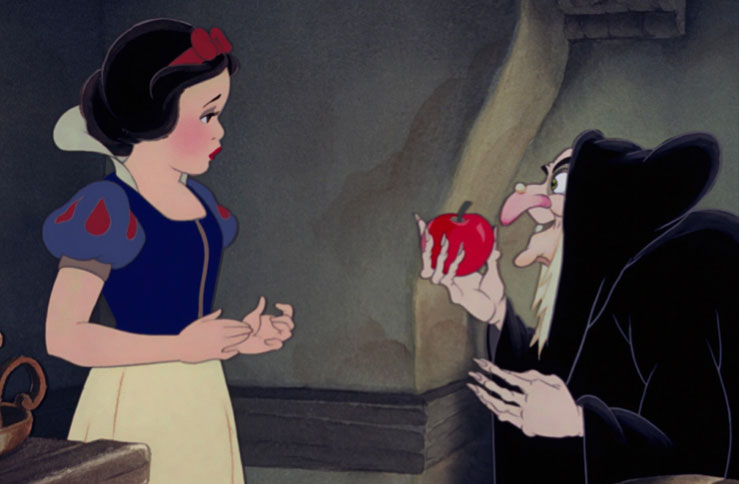 I used to teach an art class for teenagers, and there was one lesson that would always blow their minds. Here’s how the conversation usually went.

“Do any of you have an Apple computer, or an iPhone?” I’d ask. The answer was always yes. “What does the logo look like?”

“Is it just a plain apple? Is there anything unusual about it?”

Here’s where the fun starts. “Have you ever heard a story where someone takes a bite out of an apple?”

A few moments of silence from the class. Then: “Snow White…”

“Right, Snow White,” I’d say. Then I’d ask a student to recall the plot: “The witch gives Snow White a poison apple that kills her.”

“Are there any other stories with an apple?” I’d ask, leading them another step back. This time, there was usually two moments of silence. Sometimes I’d have to nudge them with a clue (“Maybe an older story?”). Eventually, someone would shout, “The Bible!” Cue the astounded chorus of woah.

In the Bible, Adam and Eve are tempted, by Satan, to taste the fruit from the tree of knowledge. Eve, like Disney’s heroine, gives in to temptation and takes a bite of an apple. Once Adam and Eve had their first taste of knowledge, they knew that they were naked, and they were ashamed. That first bite of the apple represents the fall of man.

This symbol is one of the oldest and most potent in Western mythology. Apple’s use of the logo is extremely powerful; their name and corresponding pictorial icon are synonymous. The simple logo design deftly carries the heft of centuries of meaning. Apple likes their symbol so much that they’re very protective of it, and they don’t like when other people attempt to use apples in their logos.

Rob Janoff, the designer of the Apple logo, claims that he didn’t explicitly intend this meaning when he created the logo in 1977. He didn’t have to. Mr. Janoff said he included the bite “for scale, so people get that it was an apple not a cherry. Also it was kind of iconic about taking a bite out of an apple.” Why is the bite iconic? Because of its use as a symbol over hundreds of years of mythology. Former Apple executive Jean Louis Gassée called the logo “the symbol of lust and knowledge.”

The Apple logo symbolizes our use of their computers to obtain knowledge and, ideally, enlighten the human race (when we’re not too busy using them to look at cat GIFs, that is).