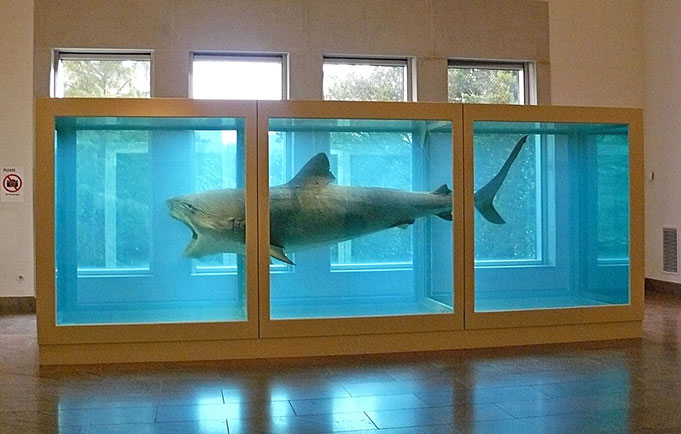 They say that all stories are about one of two things: love or death. Well, if there has ever been a work of art that was utterly and totally death-centric, it’s Damien Hirst’s 1991 artwork ‘The Physical Impossibility of Death in the Mind of Someone Living.’

The piece consists of a dead tiger shark suspended in a tank of formaldehyde. This infamous artwork is one of my favorite in the world. It is intended to shock – and it certainly does – but its meaning goes much deeper.

I viewed ‘The Impossibility of Death…’ several times during its stay at the Metropolitan Museum of Art (2007–2010). Standing in front of the shark is an alarmingly visceral experience. It evokes a primal response in the viewer: it’s natural to experience fear in the face of a predator, and disgust at the sight of a carcass. If the purpose of art is to provoke an emotional response in the viewer, this piece is successful as soon as you enter the room. It’s extremely confrontational.

Once the initial shock of the shark’s presence subsides, you can engage with deeper conceptual layers of the piece.

This carcass is a raw chunk of nature, and yet there is something otherworldly about seeing a shark in this highly unnatural context. The blue liquid emulates the shark’s natural habitat – which makes for a startling juxtaposition in the environment of an art museum. The shark is not surrounded by undulating schools of fish, but rather, by museum patrons leisurely strolling around it with audio guides in hand. It puts your senses on edge, and you begin to wonder: is it museum-quiet at the bottom of the ocean? Inside the tank? On the other side of death?

The shark is both ghostly and ghastly. Its glowing whitish pallor grants it an ethereal presence in the murky formaldehyde, and yet it is in a visible state of decay. The shark tank functions as both casket and artistic pedestal. The artwork constantly reminds you of two simple facts: This thing is dead. And when it was alive, it could’ve killed you.

Hirst has been tagged with the label ‘conceptual artist.’ He says he prefers the terms ‘artist’ or ‘traditional artist’ (like most artists of his stature, he’s quick to reject the kind of categorization that the press tends to inflict). But ‘conceptual art’ fits, and Hirst’s shark is a perfect example why: the simple idea of the piece is the focal point of the work. “I just had an idea, I wanted to do a shark in an art gallery – big enough to eat you,” Hirst told BBC Radio 4. The work is not about expression, decoration, or style. It’s about an audacious idea brought to life.

The piece harkens back to the work of Marcel DuChamp, the world’s first artist to use bold ideas as a medium in themselves. His goal, he said, was to “to put art back in the service of the mind.” DuChamp’s iconic work ‘Fountain’ (1917) was one such shocking idea: a regular urinal, barely modified with a sarcastic signature by DuChamp, presented as art. The piece was a ‘readymade,’ or a regular object selected by the artist and declared as art. Hirst’s shark can be considered a readymade. It is essentially a preexisting item that he put on a pedestal (the tank serving as figurative pedestal) and signed with his own authorship. It would’ve made DuChamp smirk.

After Hirst initially dreamt up the concept, he sketched plans on bar napkins, researched tank construction, and so forth. When Charles Saatchi approached Hirst to fund one of his works in 1991, the concept was full developed. Saatchi funded the £50,000 work, £6,000 of which was spent on the Australian fisherman hired to catch the shark. By 2006, the shark was badly decayed. It was replaced with a new corpse, which was preserved more carefully with an eye toward longevity.

The Mind of Someone Living

There’s the shark, and then there’s the title. If this artwork is one simple idea, then what are we to make of the overbearingly long name The Physical Impossibility of Death in the Mind of Someone Living? On the surface, the title instructs us that this is the closest we can get to beholding death – but that ultimately, it’s unknowable to the living. The title is insanely ‘on the nose.’ It would be like if Van Gogh had abandoned the title ‘Wheatfield with Crows’ and instead called his painting ‘I Hate Myself and I Want to Die.’ The title’s beat-the-viewer-over-the-head nature is indicative of Hirst’s sardonic, caustic sense of humor. It’s a cheeky name for a piece that needs no title at all.

Hirst’s artwork is full of contradictions. His shark is both bringer of death and is also dead itself. The piece is reminiscent of the deep sea, but is actually a carcass near a gift shop. It pretends to be one simple, shocking idea – but think about it further, and you find yourself submerged in multitudes of meanings and associations.

“I think a lot of what I do in art is criminal. In a good way.” –Damien Hirst, BBC Radio 4’s ‘Desert Island Discs’