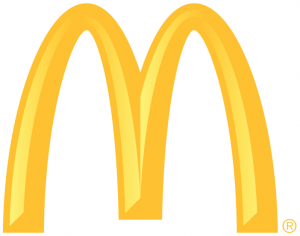 We’ve all seen this logo a million times, but have you ever seen a pair of breasts in it? Sounds absurd, I know – surely only Beavis and Butthead could see that. But here’s the story of how this theory once saved the ‘golden arches’ from getting tossed out with the trash entirely – and why it might not be so crazy.

In the late 1960’s, McDonald’s was demolishing its original buildings and replacing them with what would become the new frontier of American dining: the drive-through restaurant. The company hired design consultant and psychologist Louis Cheskin to help navigate this transition. When McDonald’s considered abandoning the golden arches that were distinctive architectural features of their restaurants, Cheskin objected. He argued that the golden arches should stay because they symbolized a pair of breasts: “mother McDonald’s breasts,” as he put it (source: Fast Food Nation). Not only did the arches stay, but they were integrated into the McDonald’s corporate logo, and with it, the American cultural landscape.

During this time period, the ripple effects of Freudian theory were continuing to reshape the world. Cheskin’s suggestion that the shape of the golden arches has a subconscious sexual meaning in the mind of the viewer is a deeply Freudian concept. Freud believed that most of our impulses are influenced by libido and early childhood experience. He also said that “We are effectively cognitive icebergs with most of our ‘thoughts’ occurring below the water line.”

Was it absurd for Louis Cheskin to imply sexual/reproductive/fertility symbolism in the shape of the golden arches – or was he correct that we perceive this sexual imagery somewhere ‘below the water line’ of our conscious thoughts? I doubt that many have ever looked at that logo and had that conscious Beavis and Butthead moment (“Huh-huh. Looks like boobs”). But the logo has become one of the world’s most iconic, and Cheskin-style ‘hidden persuasion’ branding has only increased in popularity. While there’s no way to measure the image’s subconscious resonance, I believe the symbolism is there on a subtle level.

Freud’s emphasis on the impact of early formative experiences applies to the McDonald’s brand, too. According to the BBC, “psychologists confirm a theory that (McDonald’s founder) Ray Kroc and Walt Disney traded upon, that ‘brand loyalty’ can be established by the age of two.” Much of McDonald’s business – the playgrounds, the clown, the happy meal – are aimed at children. And to what demographic would subconscious, pre-language symbolism of breasts be most potent? You don’t have to be Freud to figure that one out.