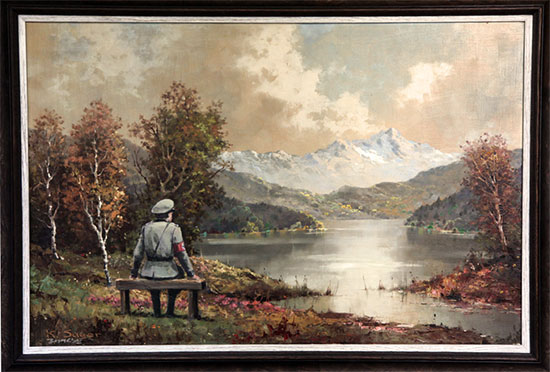 The Banksy painting ‘The Banality of the Banality of Evil’ was one of the artworks of his October 2013 NYC residency. According to Banksy’s website, this piece is an oil painting of a landscape that was purchased from a thrift store, “vandalized” (Banksy’s word) with Banksy’s painted Nazi seated on a bench, and re-donated to the thrift store. Here are some thoughts on its meaning.

The piece is a ‘collaboration’ between two artists in much the same way that graffiti artists collaborate: the landscape painter’s work of art has been literally painted on by another artist without his knowledge or consent. In graffiti/street art, this style of working with other artists is an inherent element of the medium. It’s a form of shared authorship.

When I first saw this image, I was struck by the contrast of symbolism: seeing a Nazi in a placid American landscape painting is jarring. It’s like seeing Darth Vader in a Norman Rockwell painting.

The phrase ‘the banality of evil’ refers to the idea that ordinary people can commit acts of horror when they are following orders, or following the herd. Naziism is the ultimate symbol of this idea. The Nazi soldier shown here is pictured contemplating a mundane scene. Banksy’s meta title pokes fun at the artwork (and therefore both of the artists responsible for its creation): the scenery and lack of action make for a banal image.

Consider ‘The Banality of the Banality of Evil’ in context: it was made in New York City by an artist whose favorite themes include consumerism and corporate greed. This piece is a satirical riff about man’s ability to blindly follow malevolent orders (be they from a Nazi general or a capitalist criminal). Banksy looks at evil in repose, and has a banal chuckle at its expense.